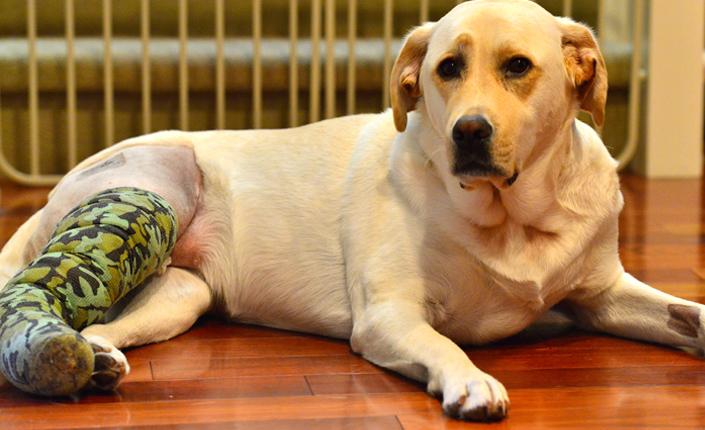 There are many highlights and opportunities that bring dog owners sheer joy and pride when watching their dog. Undoubtedly, one of these moments is watching them race around, either chasing a ball or a friend – real or imagined. These moments of delight, though, can suddenly become moments of horror, if your dashing blur of fur yelps and trots back to you owner carrying one of its legs.

Because dogs have 4 legs, obviously any one of them could get injured in a fall. However, based on how dogs have evolved, the injury is most likely to occur in a back leg. The number of possible causes of lameness in a back leg (and front leg, for that matter) are many. However, in spite of the number of different bones, joints, muscles, ligaments and tendons that comprise the back leg, about 85 % of ALL lameness in dogs are the result of a knee injury. Specifically, the injury is caused by the final tearing of a ligament called the cranial (anterior) cruciate ligament (CCL).

There are two major ligaments in the canine knee ( stifle ) joint. Their owners have the same two ligaments. These two ligaments stabilize the knee joint by firmly attaching the lower femur to the upper tibia within the knee joint itself. They form an “X” as they cross each other with their attachments and hence the name “cruciate”. This crossing pattern firmly stabilizes the knee, so that when it bends and extends, the movement is precise and controlled with little or no secondary movement that can lead to joint degeneration (arthritis) over the long term. Both of these ligaments are important to the long term health of the knee joint, but invariably it is the cranial cruciate ligament that ends up tearing, destabilizing the knee joint.

The actual causes or circumstances that ultimately lead up a CCL can be confusing to fully comprehend and they are different between owners and dogs. Because people walk essentially upright with their legs extended below them, in the standing position, there is very little tension or stress on the CCL. When we begin to walk or run, we bend our knees which causes the ligament to come under tension to stabilize the knee joint as we move. Simple and effective. For us to tear a CCL, there is almost always a sudden, severe rotational impact to the knee itself that places too much force on the ligament and the result is that it tears, usually completely. Examples most often include sports, in which the knee can be forced to try to go in two different directions at the same time while playing football, rugby or hockey. It can also be as a result of an excessive rotational force when falling at high speeds, while skiing. There are numerous examples and almost all of them result in applying a sudden rotational force to an otherwise healthy knee joint and ligament.

Dogs, however, are different in a number of ways. The most important difference is that they walk on all four legs and the knee joint is always flexed. Because of this flexion, the CCL in the canine stifle is ALWAYS under tension, even while standing. What happens over time (i.e. months and years) is that this constant tension begins a slow form of degeneration within the ligament itself. It is also suspected that this degeneration can be exacerbated by other medical conditions, e.g. thyroid disease. If a dog has a sedentary lifestyle, then the ligament may not undergo any unusual stresses during the dog’s life and there is never a problem. If a dog is active, however, then the risk of CCL injury increases.

Another difference with dogs is that when they injure their CCL, it often is not a complete tearing of the ligament, but rather a partial tear. As mentioned earlier, people almost always completely tear their CCL, because the rotational forces required to injure an otherwise healthy ligament are so great. In dogs, because the ligament is usually showing signs of chronic degeneration and hence chronic weakness, it can partially tear with relatively minor force – a force that would otherwise not effect a healthy ligament (as in people). If a dog were to be walking on, say ice, slip and come up lame in its back leg, the cause is most likely to be a CCL injury. However, it is quite possible that the CCL is only partially torn and over a few days or even weeks, the lameness could well disappear. The owner now has a false sense of security that the problem was only a “sprain”. If examined by a veterinarian, though, a partial tear would most likely be suspected. Almost all partial tears will, at some point in the not too distant future, develop into complete tears and now the CCL requires surgery to repair.

The underlying cause of a torn CCL in dogs, then, is a chronic degeneration of the ligament itself due to constant tension resulting from a dog’s evolved conformation. This diseased ligament is then exposed to either a minor or major trauma which surpasses the strength of the diseased ligament and it either partially or fully tears depending upon how great the force was. If the ligament is badly degenerated, it takes very little force to finally “pop” the CCL. There are other factors involved, as well. This is more likely to be a medium and larger dog problem than a small dog problem. The bigger the dog, the greater the weight and so the greater the force/ tension on the ligament. Other medical conditions can exacerbate the health of the ligament, as can other knee joint conformational issues, such as having a luxating patella. Obesity is a major concern as it can increase the risk factor of tearing a CCL by 4 times. Although a CCL tear can occur in any pet, it is not typically a small dog or cat problem. It may seem to an owner that the cause was an accident, but in actuality, with rare exception, it is the underlying illness (degenerated ligament) that precipitated the CCL tear.

Although a CCL tear constitutes the vast majority of rear leg lameness, a definitive diagnosis needs to be made by your veterinarian before treatment options can be discussed. In addition to the pain and lameness that accompanies the tear, usually there will be some degree of joint fluid effusion (swelling) caused by the inflammation within the joint. There will be excessive joint movement (laxity) when the joint is manipulated back and forth with your dog lying down. This motion is similar to a drawer opening and closing. Normally, if the CCL is intact, there is no such motion possible. Sedation may be required to completely relax your dog in order to fully appreciate how much movement is present in the knee joint. An X-ray can also be helpful to not only show mild effusion in the inflamed joint, but also to visualize the position of the upper leg bone (femur) relative to the lower leg bone (tibia) within the knee joint itself. If the CCL has torn, the femur rides down the backside of the tibia and that offers a definitive diagnosis. In some chronically torn cases of CCL, the body tries to heal itself by stabilizing the knee joint with scar tissue. This scar tissue can minimize joint movement (so called drawer-motion) making a diagnosis somewhat more difficult. An X-ray, though, will likely show the problem.

Surgery is considered to be the primary solution when discussing a torn CCL. Over the past 70 years, over 200 different surgical techniques in both human and veterinary medicine have been tried. Clearly, one can then appreciate that the knee is a complex joint and repair options do exist. However, a great deal has been better appreciated over the past 10 years in terms of what is successful long term and what is not. Concomitant medical and physical factors come into play, as does the size of your dog, in terms of which treatment modality is best suited for your dog. The most common surgical technique, now being recommended for almost all dogs is called a TPLO (Tibial Plateau Leveling Operation). It involves making a circular cut through the tibia below the knee joint with a special bone saw, rotating the tibia to remove that constant tension on the knee joint and then repairing the “broken” tibia with a bone plate. In the majority of cases, this operation will return your dog to normal functionality within 5-9 months, although usually they are weight bearing on the affected leg within a matter of days.

A torn cranial cruciate ligament is one of the commonest orthopaedic challenges for any dog. However, in spite of surgery providing a very good prognosis, the surgery itself is very expensive (presently $5-6,000 on average). Having a full coverage (Accident and Illness) insurance policy can help you in these difficult times. Without surgery, the knee joint will develop very significant arthritis because of its chronic instability and will require a lifetime of medication to deal with the discomfort and pain.